The Best Alternatives To Time and Materials Snow and Ice Contracts

If you’re a property manager in the mid-Atlantic, you’re probably used to a pretty basic snow and ice management situation.

If it hardly snows at all, you say “yippee” and maybe celebrate by getting dessert at lunch.

If it snows a lot, you pay a lot. Lunch dessert? A handful of Tums.

The typical time and materials snow and ice management contract is pretty stressful on your budget. It’s really tough predicting snowfall around here.

Is there a better way to pay for snow and ice management services?

Paul Wisniewski, Division Manager at Level Green Landscaping, walks us through the options.

First, a Look at Time and Materials

Time and materials billing for snow and ice services works just like it sounds — the customer pays for the contractor’s time on their property and the ice melt materials they use to keep it clear of snow and ice.

The customer doesn’t know the exact cost until the end of each snow event. It depends on how long it took and how much ice melt product was actually used.

Most of the snow and ice management contracts in this area are time and materials, Wisniewski says.

No snow? No cost.

And that’s the problem, Wisniewski says. 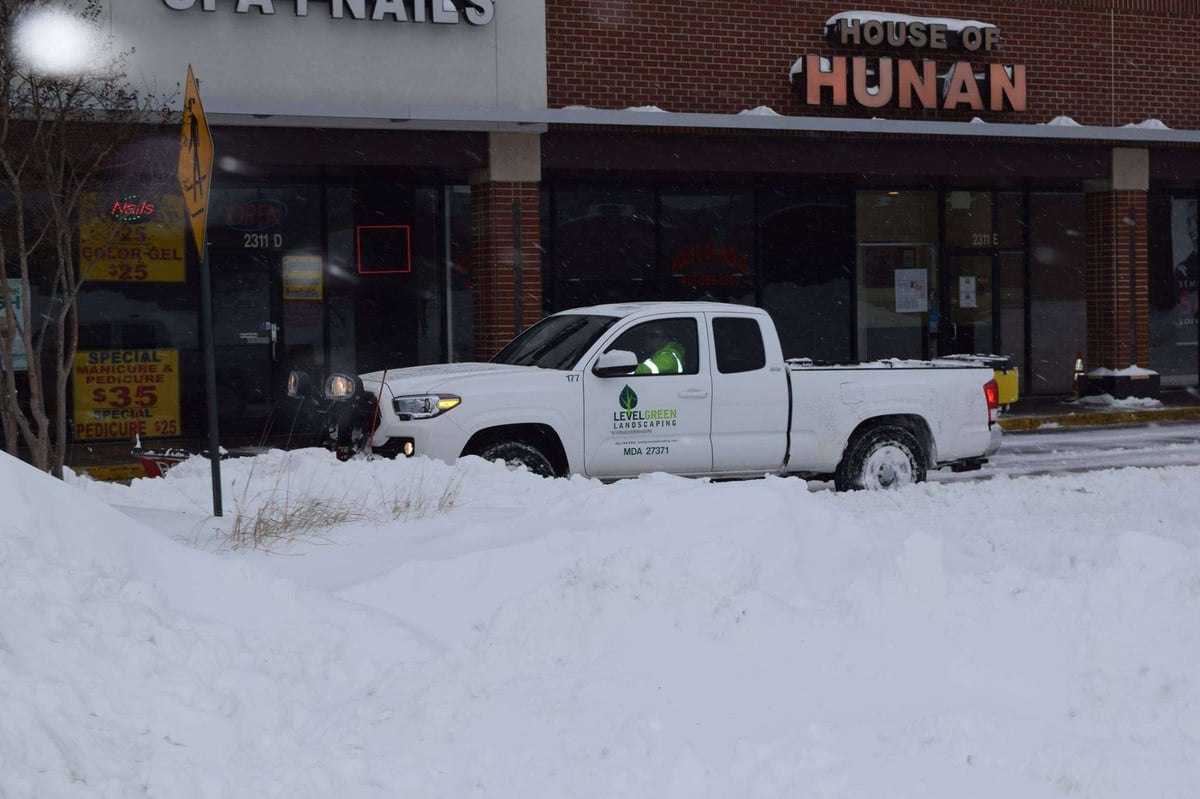 “That can really mess up your budget,” he says. “The impact on the customer’s budget can be dramatic if we get a big northeaster that drops 30 inches of snow.”

Average snowfall here is 15 or 16 inches a season, he says.

“With a time and materials contract, if it’s a low snow year the customer does well, but it’s bad for us,” Wisniewski says. “In a big snow year, it’s the other way around.”

Next Up: Per Inch of Snow

A per inch snow and ice management contract includes a quoted price for the amount of snow removed.

Each chemical application for the roadways and sidewalks has a set price per application.

While the prices per inch of snow and per chemical application are set ahead of time, customers still don’t know exactly how much they’ll pay, because they don’t know how much snow and ice management they’ll need.

Here in the Maryland and DC area, we have lots of ice events. It could rain, then the temperature drops and turns it all into ice.

“If we get one freezing rain where we have to treat your property three times, that cost can really add up,” Wisniewski says. “If we get a bunch of storms, you’ll go over your budget. You can’t predict the cost.”

Customers with a seasonal snow and ice management contract pay a set amount for snow and ice services for the season — no matter how much snow falls or how many visits to their property are needed.

Prices are set based on snowfall data averages taken over years, Wisniewski says.

The goal is a five-year contract, he says, to ensure those low snow years and high snow years even out over the span of the contract.

There are several ways to structure a seasonal contract, Wisniewski says, including a provision that would reimburse a customer a percentage of the cost if it’s a year with very little snow.

The benefit? The customer always knows exactly how much to budget for snow and ice services.

And the contractor has resources to ensure they have the equipment and materials to do the job. There’s a lot of overhead costs for the contractor — whether it snows or not.

“This way, it’s more of a partnership,” Wisniewski says. “Let’s work together so we can all budget consistently with budgets that don’t fluctuate so much. When we get a lot of snow, your budget won’t suddenly triple.

“You won’t get yelled at because you went over budget,” he says. “You’ll know exactly what the budget is.”

These seasonal contracts are common in other parts of the country, Wisniewski says, but are just starting to show up here.

“It’s ultimately a win-win situation,” he says. “With time and materials, sometimes we win, sometimes the customer wins. That’s not a partnership.”

A seasonal snow and ice management contract is especially suited to properties with a low tolerance for snow and ice, like hospitals and business parks, Wisniewski says. They pay a set price, then know crews will be there as often as it takes to keep the property safe.

Trust Level Green With Your Snow and Ice Services

Winter’s on its way. Your goal: to protect everyone who spends time on your commercial property and minimize your organization’s chance of being exposed to snow and ice-related hazards, from slips and falls to traffic accidents and property damage.

Wouldn’t you love to make that happen without the stress of an unpredictable budget?

Come talk to us about the benefits of a seasonal snow and ice management contract, and cross a big winter worry off your list.

Call us at 202-544-0968 or complete our contact form online to ensure you have the best snow and ice management contract for your commercial property — before the snow piles up.