A Russian invasion of Ukraine could materially disrupt the global oil supply in several ways, but none are likely, in our view. Nevertheless, with the global oil supply/demand balance already tight, the added geopolitical risk has been a factor in the recent uptick in crude prices (along with Kazakhstan fuel protests, Libyan supply outages, and the limited impact of the Omicron variant on demand).

Further escalation could push prices even higher in the short run. Any upside on price should be favourable for Western oil producers, as there is limited asset exposure in Russia in the event of sanctions. Of our coverage, only Exxon, Shell, and BP hold positions, and those positions are relatively small. High oil prices make sanctions unpalatable for the US and Europe.

As Russia currently exports around 5 million barrels a day of crude oil, Iran-style sanctions specifically targeting Russian oil exports could theoretically wreak havoc on oil markets, but they are unlikely, in our view. Given that energy exports account for 60% of all Russian exports and 30% of the country’s GDP, this would seem like a powerful deterrent or punitive response if an invasion takes place. The problem is that oil and natural gas prices are already too high in the United States and Europe. On several occasions in 2021, President Joe Biden lobbied OPEC to increase output in order to ease surging fuel costs. The optics of doing that while supporting sanctions that would directly choke off oil supply and push up prices are awkward to say the least.

So, leaders face a Catch-22: oil sanctions severe enough to hurt Russia would also cause economic misery at home, whereas sanctions mild enough to be tolerable for voters would probably have no effect. While sanctions in some form are likely, we expect Western leaders to steer clear of Russian crude exports.

Self-Imposed Embargo Too Painful For Russia

Russia could choose to limit its own oil exports to punish the West. There is precedent for this: in 1973, certain Arab states including Saudi Arabia declared an embargo targeted at nations that supported Israel during the Fourth Arab-Israeli war; Russia could view the US and European Union in a similar way. However, this would be a huge sacrifice for Russia, given its reliance on oil and gas revenue. And it would only inflame the situation and further alienate European powers, such as Germany, that so far have taken a softer stance.

While the Ukrainian situation seems more intense than past crises, similar conflicts in the past have not resulted in material energy flow disruptions, and we don’t expect them to do so this time.

At-Risk Infrastructure is a Small Slice of Supply

Russia is expected to produce 10.4 mmb/d in 2022, about 10% of global supply. However, the bulk of its output occurs in Siberia and the Volga region in south-eastern Russia, far from Ukraine, where there is no proximate production.

As such, a substantial impact on producing assets from military action is very unlikely. However, some Russian crude oil export routes do run through Ukraine and the bordering Black Sea and could theoretically be disrupted. Russia exports about 2.0 mmb/d of oil through the Black Sea, primarily through its own ports in Novorossiysk, and a further 1.4 mmb/d is shipped on the Druzhba pipeline to refineries in Eastern and Central Europe. While disruption in the Black Sea is unlikely, pipeline flows are at greater risk. However, the bulk of shipments to Europe arrive on the northern leg of the Druzhba pipeline, which goes through Belarus, bypassing Ukraine.

Most Russian Exports to Europe Utilize the Druzhba Pipeline (Pictured), but Only About 250 mb/d Flows Through Ukraine on the Southern Leg, and Is Therefore Vulnerable to Outages If the Situation Escalates 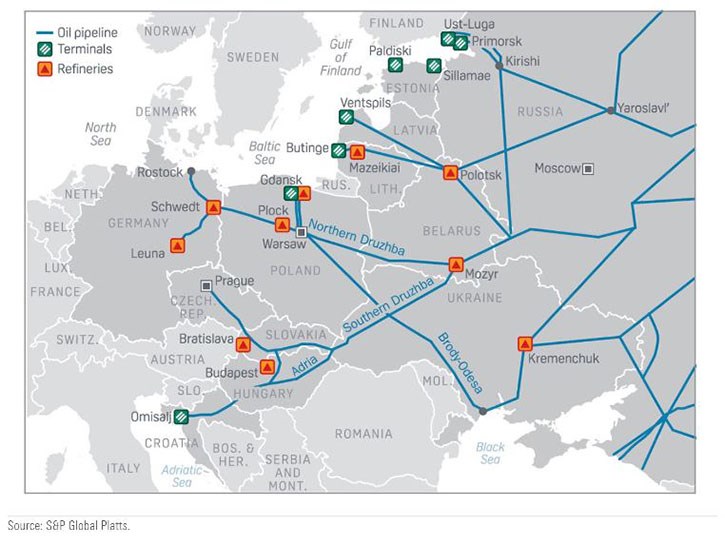 The southern leg of this pipeline only ships about 250 mb/d, which is relatively trivial and limits the potential for disruption. Besides, these flows would most likely get rerouted through other pipelines, serving Europe further north or toward eastern pipelines serving Asian markets, while waterborne exports could be routed through the Baltic Sea. The rerouting of flows would damp any impact on prices. 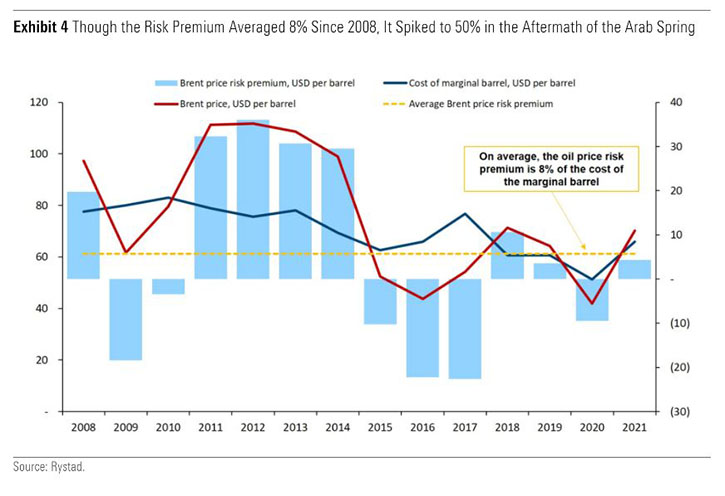 We believe Ukraine tensions are one of the supporting drivers of the sharp rally in oil prices in the past couple of months, even though fundamentally we see only a modest threat to supply.

The market is assigning a higher risk premium, which suggests investors see more scope for disruption than we do or are generally worried about rising uncertainty amid geopolitical tensions. Either way, this risk premium will probably increase further if the situation escalates, and that translates to a spell of even higher prices. However, such prices won’t be sustained unless volumes are meaningfully affected.

The risk premium can be defined as the difference between marginal cost and market, with the latter incorporating above-ground risks (not strictly production-related) that marginal cost calculations do not. Norwegian energy research firm Rystad pegs marginal costs at $65 a barrel for Brent (slightly higher than our own estimate of $60/barrel). On that basis, the February 2 price of $89/barrel implies a risk premium of 35%, well above the 8% average during 2008-21 but lower than the 50% that was the norm for several years after the Arab Spring (2011- 14).

In that period, regime change in Libya coincided with the loss of 1 mmb/d of supply, pushing prices over $100/barrel. Historically, events that have had a significant and durable effect on prices have also been associated with tangible supply or demand shocks; supply-related examples include the 1973 Arab embargo, the 1990 Iraq invasion of Kuwait, and the 2002 Venezuelan oil strike.

Other proxies for the current situation that did not affect supply, like the 2008 Russian invasion of Georgia or the 2014 annexing of Crimea, did not affect global oil prices much in the end. As we do not anticipate any material disruptions in this case, much less 1 mmb/d, we think a 50% risk premium is unwarranted. Market jitters could still push the risk premium to that level temporarily in the runup to an invasion, but this would be short-lived as long as supply remains unaffected.

To view this article, become a Morningstar Basic member.